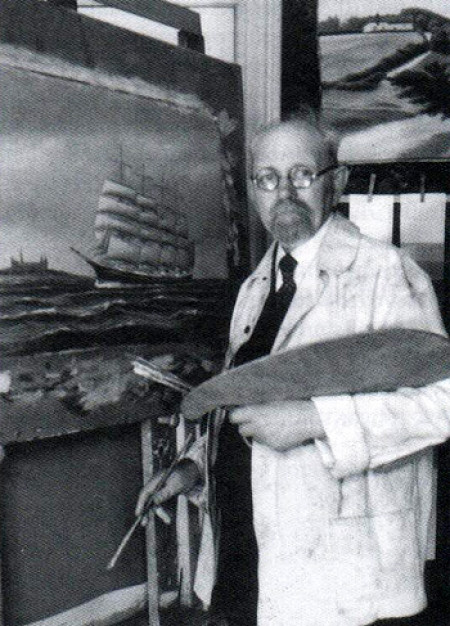 (translated from Danish by Google Translate)

Peder Christian Pedersen was the son of the carpenter Anders Pedersen. One day, the father was working on a roof, he dropped a piece of wood into the head of his 3-year-old son Peder, who was injured and lost both his hearing and his speech. All his life, Peder was disabled and had to live like a deaf man.

At the age of 9, he came to the Institute for the Deaf and Dumb in Copenhagen. The quiet boy from North Jutland had a hard time committing himself; but soon the Danish teacher experienced Peder's abilities for drawing. He equipped the boy with drawing media. He immediately began to translate the day's experiences into drawings.

At the confirmation he came home to North Jutland again and would very much like to learn as a carpenter - this was impossible, however, and he came to study painting with Malermester Bloch. He became a very skilled painter and after his apprenticeship he moved to Aalborg, where he got a job as a painter.

He started painting - and ship paintings and other maritime environments became his specialty. There are i.a. a number of ship portraits from the Limfjord area. In September 1928, Denmark's pride, the school ship Copenhagen, lay at the quay in Aalborg, and Peder Pedersen was at the harbor and made a lot of sketches and noticed many details of the magnificent ship. When the ship sank a few months later and every man drowned, he painted the magnificent ship for the family. A market soon arose to have the magnificent ship hanging in the Danish living rooms as a reminder of Denmark's greatness on the world's oceans. Peder Christian Pedersen began painting countless "sofa pieces" of the School Ship Copenhagen, and he himself stated on his 70th birthday in 1940 that he had painted 10,000 paintings of the School Ship. Many he has made, as it still, to this day, 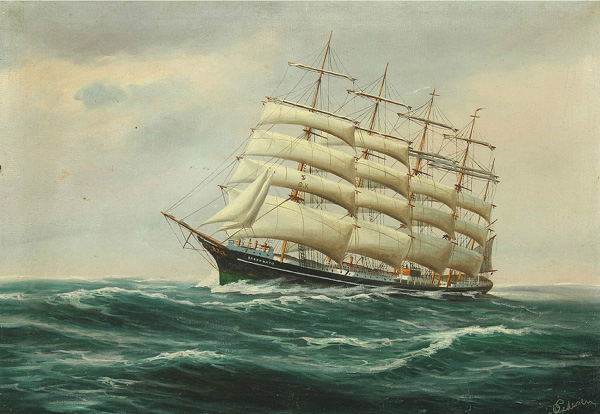