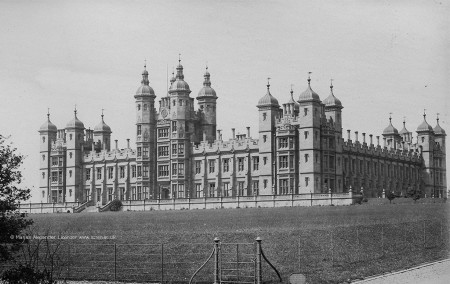 1850: Donaldson's School for the Deaf, Scotland

"When Edinburgh printer and businessman, James Donaldson, died in 1830, he left his estate to charity. His instructions were to build a facility to care for children who would otherwise have been living on the streets. Twenty years later, an impressive school building finally opened its doors at West Coates. Donaldson’s School, as it came to be known, became an important part of Edinburgh’s skyline and Scotland’s deaf history.

Initially, the school was known as Donaldson’s Hospital. Deaf children were not specifically mentioned in the original Trust Deed. However, during the long building project, school governors were so impressed by news of deaf education in other parts of Europe that they agreed to include deaf children on the roll.

To find out how many children needed this special education, parish ministers were asked to send details of deaf children and families in their area. This resulted in the first records of the deaf population size in Scotland. Thirty deaf children were accepted into Donaldson’s Hospital when its palatial building opened. This rose to 120 by 1880.

Queen Victoria officially opened the school in 1850, although it was not quite finished yet.

In 1938, Donaldson’s Hospital amalgamated with the Royal Institution for the Deaf and Dumb which was based in Henderson Row.

In the later part of the 20th century, many of the school’s annex buildings were sold off. By the 1980s, all ages of deaf children were educated on the original site at West Coates.

As Scottish educational policies of mainstream inclusion expanded, the numbers of pupils at Donaldson’s College, as it become known, reduced dramatically. In 2008, Donaldson’s moved to a new campus in Linlithgow. It continues there today, supporting pupils with a wide range of communication needs.

Meanwhile, the original West Coates building has been developed into luxury apartments."