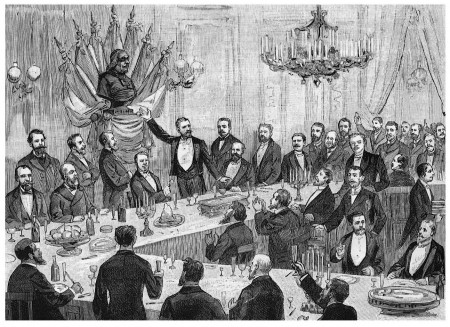 On November 30, 1834, the first Silent banquet was organized by Ferdinand BERTHIER and Alfred BOCQUIN who are themselves deaf, on the occasion of the 122nd anniversary of the birth of Abbot de l'Epée. This tradition continues to be honored in nearly every country in Europe and in the United States.

"The shape that Deaf space took was an annual banquet, held each year in November to
celebrate the anniversary of the birth of the school’s founder, the Abbé de l’Epée. Banquets were a traditional protest event in nineteenth-century France, and the Parisian deaf-mute banquets were no different. They were “reversed,” carnivalesque events in which Deaf people became the majority, sign language the norm, hearing people the minority, and spoken French the “foreign” language. The events themselves were subscription-based, black-tie dinners that adhered to a standard format: a sumptuous meal followed by speeches and toasts (Graff, JSM, November 1900: 175; Gulliver 2004). They quickly established themselves as a central feature on the Parisian Deaf calendar."
from: Gu l l i v e r , M . (2015). The Emergence of International Deaf Spaces in France from Desloges 1779 to the Paris Congress of 1900. In It's a Small World: International Deaf Spaces and Encounters (pp. 3-14).Gallaudet University Press.