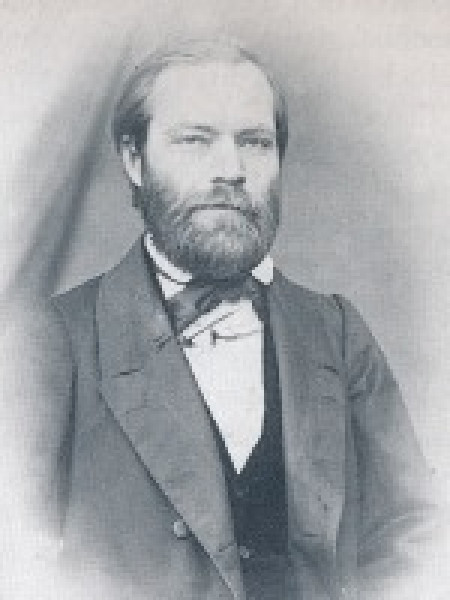 Carl Oscar Malm was born in the Iso-Vahe ’rustholli’ estate in the parish of Eura on 12 February 1826.

Malm’s deafness was first noticed when he was expected to start speaking. The cause of his deafness is unknown. It was guessed that his wet-nurse’s scabies could have been the cause, as it was transmitted to Malm and caused his ears to exude a substance mixed with blood during the illness. Efforts to cure the deafness included electric current at a physicist’s practice in Stockholm, but nothing worked.

In August 1834, the 8-year-old Malm arrived at Manilla, the school for the deaf in Stockholm. The school’s most renowned teacher was Johan Gerhard Holtz, deaf himself. Malm was Holz’s private student until 1840, after which he became an actual student at Manilla. As was the common practice at the school, Malm learned two languages as Holtz’s student: the sign language used at the school and written Swedish.
Even during his school years, Malm dreamt of founding a school for the deaf in Finland. After returning to Finland, Malm started working as a private teacher for two deaf boys in the parsonage of Koivisto in February 1846.

In autumn 1846, Malm decided to open a private school for the deaf in Porvoo. The school started its operation at the beginning of October at Malm’s father’s house, in the address Kankurinkuja 5. At first, his former private students were the school’s only students. Malm believed, nonetheless, that there were plenty of deaf people in Finland who yearned for education. Therefore, he asked the Diocesan Chapter of Porvoo to find out how many deaf people there were. The result of this count in 1848 was that there were 1,466 deaf people in Finland, 602 of whom were under 20 years of age.

The board filed an application to the senate in 1858 for a state-funded school for the deaf. That same year, the senate issued a decree on founding the school in Turku. The aim of the school was to provide the deaf teaching in keeping with the general popular education.

Malm was accepted as a teacher at the school without application proceedings, but as the headmaster, they wanted someone with perfect hearing and speaking abilities, along with a clerical education if possible. Malm moved to Turku in summer 1859 and the school started its operation in January 1860.

At the Porvoo school, Malm used the teaching methods he had learned at the Manilla school. Manilla emphasised the importance of learning the sign language, finger spelling and written language. Malm regarded the written language as a necessity for the sake of information acquisition and communication with the hearing.

Malm considered sign language as deaf people’s natural mother tongue and emphasised that it could be used to express everything that speech could. Deaf students needed to learn two languages, however: the written and the signed. They learned the written language through the signed language. In other words, Malm’s teaching method aimed at bilingualism.

Malm’s work at the state school for the deaf in Turku was short-lived: he fell ill and passed away as the semester ended, on 8 June 1863 at the young age of 37. A story is told in the deaf community that Malm had helped a horse that had fallen into a river. He became ill as a result, and died shortly thereafter. Malm was buried in Turku. He had only worked at the school of his dreams for three and a half years.