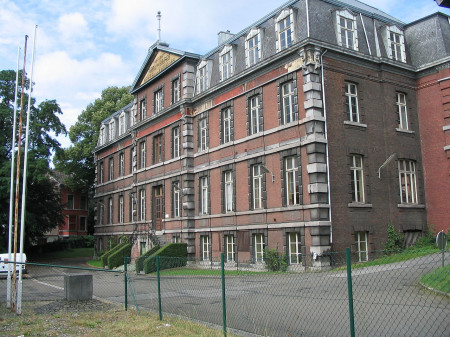 1819: First School for the Deaf in Belgium - Walloon

A school for the deaf and the blind opened in Liège, thanks to the efforts of Jean-Baptiste Pouplin. This former officer was born in Gisors in France.

Brother Orest wrote the following: "It happened on 2 June 1819. In a separate room, next to the classroom where in his capacity of a qualified teacher in Liège (Wallonia) he taught every day, Pouplin had assembled four deaf pupils. He was trying to teach them how to read and write, among other things by using an illustration of the hand alphabet for the deaf and dumb he chanced upon."

Pouplin was inspired by the example of th Groningen institute for the deaf of H.D. Guyot (their success of attracting donations and pupils). In March 1820, he made an appeal to benefactors and he continued to raise funds.

In Februari 1822, the institute was founded and Pouplin became its director. Six months later, Joseph Henrion (1793 - 1868) was appointed as a deaf teacher to assist Pouplin, his father-in-law.

Henrion was a former pupil of Sicard."