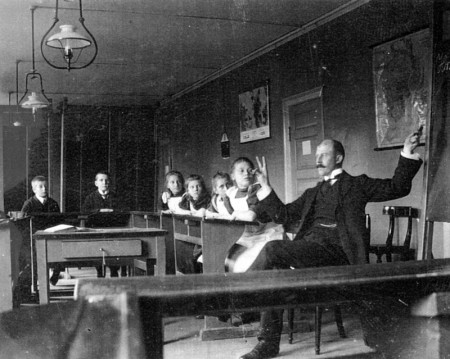 "The kg. Danish Institute of Deafness in Copenhagen (kgl. Døvstumme-Institut, 1807-1949) was established by the Fundats of April 17, 1807, at the initiative of Dr. P. A. Castberg. He rented a house in Sølvgade, but when a law of 1817 ordered the teaching of all the deaf children of the country, he had to move to a larger house in Stormgade.
In 1839, the Institute was able to move to a newly erected building on Citadelsvej / Kastelsvej in lovely rural surroundings just outside the Castle.
The institute then had 88 permanent residents, many of whom did not come home during the Christmas or Easter holidays, or even during the summer holidays. Water was added in 1858, the first toilet came in 1902, electricity in 1912 and central heating in 1934.
The school's student numbers continued to rise, and the building had to be expanded in 1859 and in 1912. The school on Kastelsvej stopped being a boarding school in the 1950s, but for students who came from far away, student homes were established close to the school. Nevertheless, there were so many students that in 1968 a new building had to be erected, which also had to be expanded in 2001 and 2007.
For 200 years the teaching at the School on Kastelsvej has been based on the use of sign language, hand alphabet and written presentation.

The school was only kindergarten / preschool in the years 1926-1950, after which the students were distributed to the deaf schools in Fredericia and Nyborg according to the Deaf Law of 1926. It is therefore difficult to talk about actual teaching these years. At the same time, the School had increased competition from private schools, with a growing parental interest in teaching their children near the home, rather than sending them to Funen and Jutland.

From 1980 onwards, a two-language model has been taught, which includes sign language and written Danish (oral Danish if possible). This means that more students have been able to complete the regular school graduation exam."