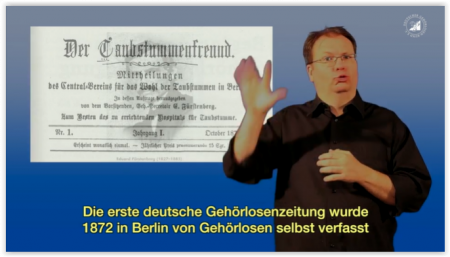 "With excerpts from the film "Misunderstood People" from 1932 as well as other documents and stories from contemporary witnesses, the German Deaf Association produced a new, one-hour film in 2013 entitled "The Deaf in the Nazi Era".

This film shows how the diversity of the deaf community in Germany and especially in Berlin was gradually destroyed during the Nazi era. In 1931 a local group for the deaf and hard of hearing was founded in the Berlin NSDAP.  A deaf SA storm followed in Berlin. Shortly after the seizure of power, the deaf NS-Ortsgruppenleiter ousted the previous chairman of the “Reich Association of the Deaf Germany” (Regede) from his position.

In the course of the “Gleichschaltung”, many deaf associations in Germany were forcibly dissolved and converted into local groups of the Regede. Politically dissenters lost their offices.

Around 1,000 deaf Jews in Germany, including around 600 in Berlin, were expelled from their deaf associations, later mostly deported and murdered.

Due to the Hereditary Health Act, the Nazi regime ordered the compulsory sterilization of around 15,000 deaf people between 1934 and 1945.

Around 1,500 deaf “mentally disabled” and “mentally ill” people were among the victims of the “euthanasia” mass murder during the Second World War."