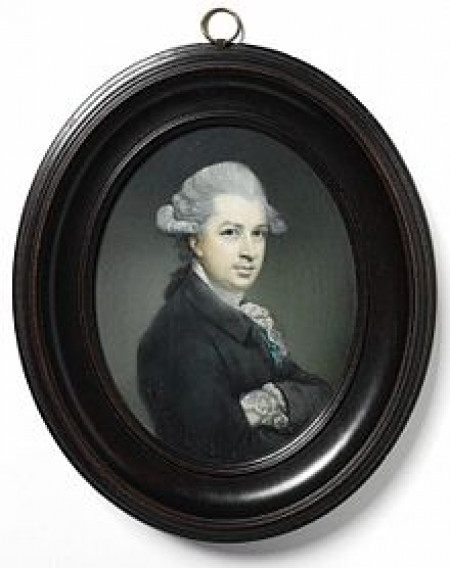 Richard Crosse  was a leading English painter of portrait miniatures.

Crosse was born on 24 April 1742 in Knowle, in the parish of Cullompton, Devon; to parents John and Mary Crosse. His father was a lawyer, and his family were members of the landed gentry. Crosse was, like one of his sisters, completely deaf and never able to speak. He had at least six siblings.

Crosse began painting as a hobby, as was the fashion amongst the gentry. At the age of 16 he won a premium at the newly created 'Society for the Encouragement of Arts, Manufactures and Commerce' (the Society of Arts) in London. He then moved to London and, like Richard Cosway and John Smart, he studied at the new drawing school of William Shipley, the founder of the Society of Arts. He also studied at the Duke of Richmond’s Gallery.

Crosse exhibited his work at the new London societies: at the Society of Artists 1760–1796, the Free Society 1761–1766, and the Royal Academy 1770–1796. He lived and worked in Henrietta Street, in Covent Garden, London from 1760. His brother acted as intermediary between Crosse and his clients.

Basil Long in his book "British Miniaturists" (1929) regarded Crosse as a very accurate draughtsman who painted without hesitation or retouching and who will one day receive recognition for his sound, if modest, work.

Despite not being able to hear or speak, Crosse was very successful, and was highly regarded by his distinguished clientele. His clients included the Prince of Wales, and the Dukes of Cumberland and Gloucester. He painted his works mainly with watercolour on ivory; he also executed a few miniatures in enamel, a difficult and not always successful medium; as well as painting portraits in oil.

Crosse's work is refined, and in the best examples the sitters really look as if they could walk right out of the frame, they are so lifelike. Crosse’s miniatures often seem to be dominated by a shade of greenish-blue, maybe influenced by the early work of Joshua Reynolds. His works tend to have a greenish-blue hue to them, and his red pigments have faded a little over the years. He seldom signed his work."

"Documentary as part of the Deaf History series. This episode is about Richard Crosse, a deaf miniature portrait painter from hundreds of years ago. Reporter Sebastian Cunliffe visits London’s Victoria and Albert museum to look at miniatures dating back to the 16th Century, when photographs did not exist, and these portraits were the only way of preserving the image of loved ones. There, he tells us about Crosse, a deaf man born into the upper classes in Devon, who began painting as a hobby in his teens. When his talent was recognised, he moved to London to begin learning his trade."