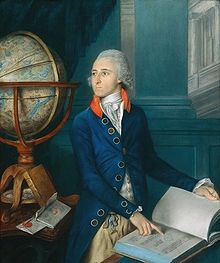 John Goodricke, named after his great grandfather Sir John Goodricke 1617–1670 (see Goodricke baronets of Ribston Hall), was born in Groningen in the Netherlands, but lived most of his life in England.

He became deaf in early childhood due to a severe illness. His parents sent him to Thomas Braidwood's Academy, a school for deaf pupils in Edinburgh, and in 1778 to the Warrington Academy.

After leaving Warrington, Goodricke returned to live with his parents in York. There, he became friends with his neighbour Edward Pigott, whose father Nathaniel Pigott had built a sophisticated private observatory. Edward was already interested in variable stars, and he gave Goodricke a list of those that he thought were worthy of observation.

Goodricke is credited with discovering the periodic variation of β Lyrae and δ Cephei, the prototypical example of the Cepheid variable stars.

Although several stars were already known to vary in apparent magnitude, Goodricke was the first to propose a mechanism to account for this. He suggested that Algol is what is now known as an eclipsing binary.

He presented his findings to the Royal Society in May 1783, and for this work, the Society awarded him the Copley Medal for that year. He was elected a Fellow of the Royal Society on 16 April 1786. He never learned of this honour however, as he died four days later from pneumonia. He never married."