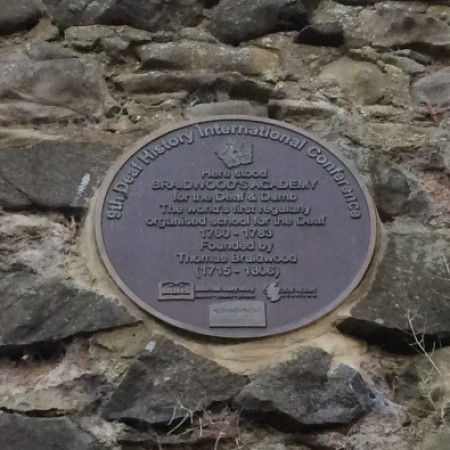 Dumbie Dykes:
"The site housed Edinburgh's Deaf and Dumb School until the mid 19th century. On demolition the enclosing walls (dykes) were left.
As the inhabitants of the school were known as the "dumbies", the remnant area became known as Dumbie Dykes or Dumbies Dykes."
From: https://en.wikipedia.org/wiki/Dumbiedykes

Deaf History Scotland and the British Deaf History Society are delighted to announce that Edinburgh’s Lord Provost unveiled a commemorative plaque on the site of the world’s first school for the deaf, Braidwood’s Academy for the Deaf and Dumb.

The event was co-hosted by the British Deaf History Society (est. 1993) and Deaf History Scotland (est. 2008), two organisations with the aim of promoting and advancing the discovery, preservation and conservation of the histories of Deaf people, their communities, culture and sign languages. The Deaf History Journal is published four times a year, and both organisations hold conferences, seminars and workshops for members and the public. The unveiling of the plaque commemorating Braidwood’s Academy represents the culmination of months of hard work and fundraising, with donations towards the cost of the plaque received from across the UK from members and friends of the Deaf community, and from supporting organisations.

Thomas Braidwood (1715 -1806) founded his Academy – the first regularly organised school for deaf children – in 1760. The area is now known as Dumbiedykes, named after Braidwood’s ‘deaf and dumb’ pupils. The school was relocated to London in 1783, and the house where the deaf pupils were taught was demolished in the 1940s. A portion of the house’s wall is still visible on Dumbiedykes Road, and a plaque was mounted there to celebrate Edinburgh’s unique place in the history of deaf education. The site of the plaque is a mere half mile away from the Scottish Parliament, where the British Sign Language (Scotland) Act was passed unanimously on 17th September 2015. Scotland’s deaf people are beginning to be recognised and celebrated as part of our rich and diverse heritage.