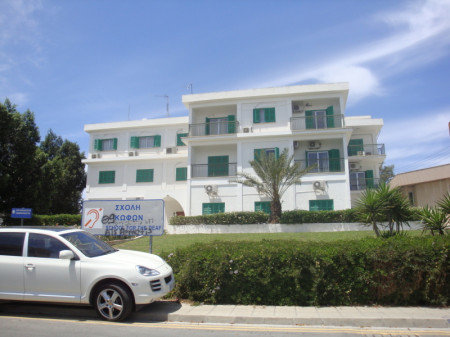 1953: First School for the Deaf in Cyprus, Nicosia

"Nicosia, the capital of the Greek part of Cyprus, has a school for the deaf, which was founded in 1953 by George Markou, who today is called the "Father of deaf people".

In 1945, Semeli Tsatsou, head of the school for the deaf in Alexandria (Egypt), visited Cyprus as a tourist. During her time there, she spoke with someone from the Ministry of Education. She suggested that Cyprus should have a school for the Deaf.

The Ministry of Education passed on her suggestion to the Rotary Club of Nicosia. Within a year, the members collected the money needed for a scholarshop, and in 1949 the ssent George Markou to England to learn about the education of the deaf.

In 1979, George Markou became the director of the school.

From the very start of deaf education in Cyprus, the communication method never changed. The reasons for that being that the oral method had been used since the day of the school's inception, the majority of teachers prefer this method and had been accustomed to it since their training."

"The School for Deaf Children that was opened under the rule of the British Administration in Cyprus, was opened in the 1953–1954 academic year and became the second private education institution on the island. Additionally, it was a mixed school that served both the Greek and Turkish communities.

Although the school was initially opened with contributions from the Rotary Club, it continued to provide educational services with funds from the British Administration, students’ parents and voluntary contributions.

During the period of mixed education, the school could not adopt a fully settled structure in terms of the building in which it was located and was moved to different areas during that period.

In the period when the British government transferred responsibility for the education on the island to the Greek and Turkish communities, the school continued to provide services on a mixed basis.

However, after the events of 1963, the Turkish teachers and students began to leave the school. Today, it continues its activities in southern Nicosia, whereas in the northern part of the island, the Lapta School for People with Hearing and Speaking Disabilities was opened in 1975 in order for Turkish students to continue their education."