Deaf Museums in the EU 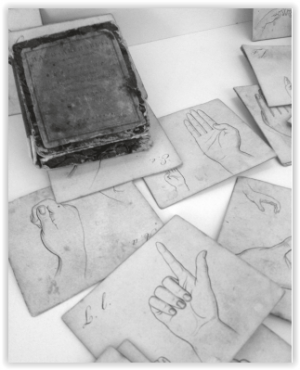 The Broeder Leothard museum owns a great deal of material, including the archive of Navekados (National Association of Catholic Deaf and Dumb Societies), the predecessor of Fevlado. It was located in the Emmaüs Center for the Deaf in Ledeberg  and accesible to the public.,

Also the archive of six East Flemish deaf clubs were in Ledeberg. Brother Maurice Buyens was the former general manager of the Saint Gregory Institute and he inherited the archive from his predecessors. It was an extensive archive since the foundation of the school for the deaf in 1825 by Canon Peter Joseph Triest.

Brother Maurice realized that it was important not to hide that archive, but to display it publicly. A three-part book was written and it took no less than fifteen years to finish it. All the information in those books canbe found in the museum .

The official opening date of the museum: 29 September 2006. It could be visited by appointment only.

Due to lack of space, the collection has since then been deposited in the Dr. Guislain museum in Ghent, https://www.museumdrguislain.be, where it is currently not on display.

The official opening date of the museum: 29 September 2006. It can be visited by appointment only.